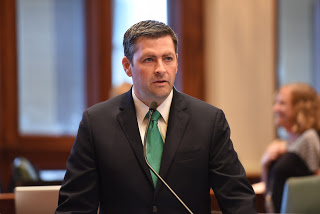 HR 1345, jointly sponsored by House Republican Leader Jim Durkin and Speaker of the House Mike Madigan, recognized Breen’s commitment to responsible budgeting and spending and his commitment to easing regulations on the business community. They also recognized Breen for legislation he ushered into law that specifically helped the people of the 48th District.

House Republican Deputy Leader Tom Demmer (R-Dixon) spoke to the honorary resolution for Breen, and said, “His leadership, expertise, and strong public speaking skills allowed him to be elevated quickly to the role of House Republican Floor Leader, where he has vigorously defended our caucus positions on many critical and often controversial bills. Aside from his responsibilities as our Floor Leader, in just four years, Peter ushered 32 of his own bills into law. He has always been an advocate of responsible spending and balanced budgets, and has fought hard to address the crushing tax burden that is causing rising numbers of his constituents to flee to other states.”