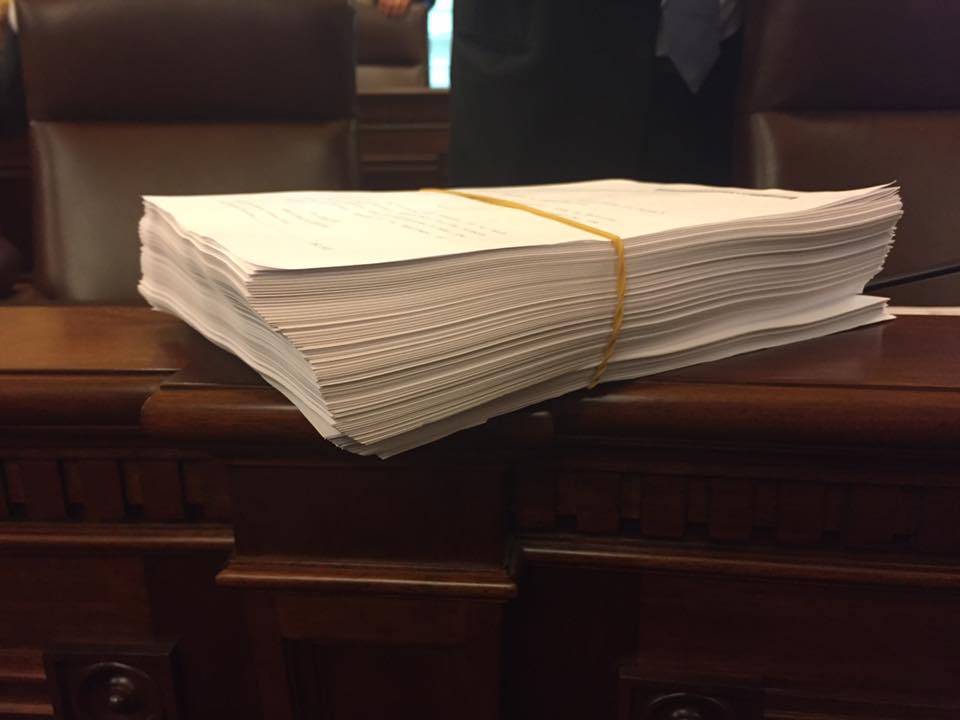 Next week, May 31st, we end our regular legislative session. Last year around this time, the General Assembly approved bills spending about $36 billion, even though our projected income for the year was roughly $32 billion. Those bills passed on almost straight party-line votes, with Democrats in favor and Republicans against. The governor said he would veto any unbalanced budget, and when the spending bills got to his desk, he followed through on his promise. In the intervening year, we’ve had on-again, off-again negotiations over the budget, with little progress. Government spending and operations have continued for the most part, due to various courts ordering the state to fund specific programs and services.

Maybe it’s an oversimplification to say that fixing the budget is a math problem, but on one level, that’s true. When you’re doing a budget, you start by determining how much money you have available to spend, and then lining up what services you want to spend it on. If you want more services than you can afford, you have three options: 1) figure out a way to get the services cheaper, 2) decide you don’t really need all those services and reduce spending on some of them, or 3) increase the amount of money available by borrowing money or raising taxes.

The one thing you can’t do is to spend $36 billion when you only have $32 billion available. It doesn’t work in your budget at home, or in a small business, or in a municipal government, and it certainly doesn’t work for the State of Illinois.

Some have claimed that Illinois law allows the governor to sign unbalanced spending bills but decide not to spend some of the money. The problem with that claim is that the General Assembly puts so many strings on the way money must be spent that the governor’s hands are tied under current law. The governor can’t use our “option 1” and figure out how to deliver services cheaper, because he’s forced to spend the dollars in a particular way. He also can’t fully use our “option 2,” because he’s forbidden from moving money away from legislators’ pet projects to the places where the money is most needed.

You may not have seen it reported, but several months ago, a bill was filed to fix this problem, called the Unbalanced Budget Response Act. That Act would give the governor the flexibility to make the difficult spending decisions necessary to balance the budget.

If there’s anything I’ve learned in my past year-and-four-months in the General Assembly, it’s that no politician ever wants to cut or reduce a government program. That’s why the governor’s offer to make the reductions himself is extraordinary. He’s agreed to be the so-called “bad guy” and take the heat for whatever cuts are necessary to balance the budget. And if this Act is passed, it would only be effective until the General Assembly reaches agreement on a balanced budget: the Act would serve as a backstop for the legislature.

Each side has a way it views the current budget crisis. The number one point that Republican leadership has impressed on our members is that we’re willing to talk, anywhere, anytime, with anyone, to negotiate solutions to this crisis. Some fruits of that willingness are two emergency funding measures that were negotiated and passed by rank-and-file members, to ensure that our colleges are able to stay open and that social service charities can get some portion of the money they’re owed from the state.

But as willing as we have been to negotiate, there’s not been a lot of progress on an agreed overall budget. Call it politics, call it fear, whatever. Either way, we need a balanced budget. We’re the only state in the country without an approved balanced budget, and a measure like the Unbalanced Budget Response Act can get us there immediately, while still allowing for continued negotiations by the legislature.