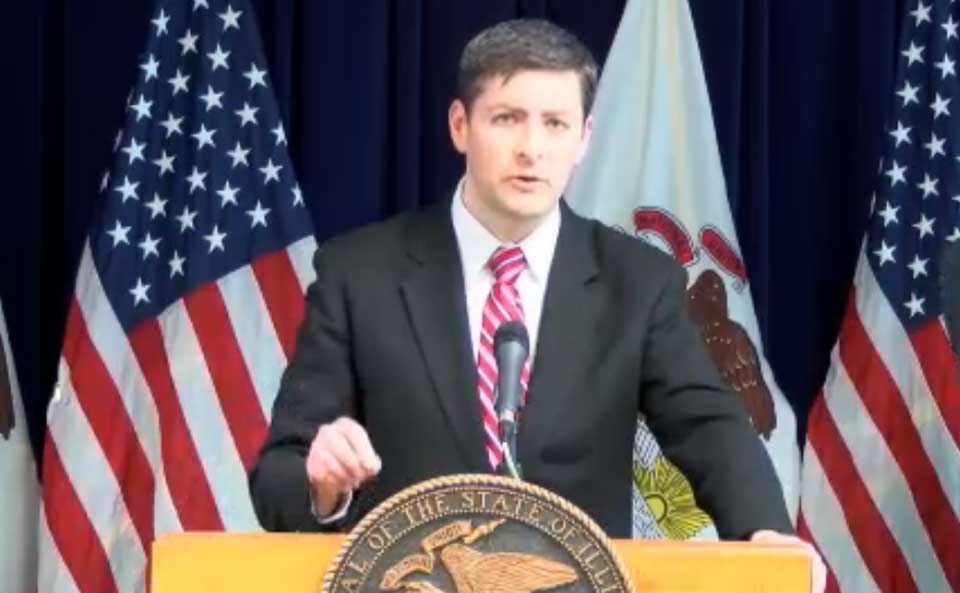 It’s all too often that government corruption goes unnoticed. But thanks to two watchdog groups and a brave trustee, the public is very aware of the recent golden parachute scandal at College of DuPage. The outcry is in response to the $763,000 early retirement package just awarded by the COD Board to its president, Robert Breuder.

This is the same guy that used taxpayer funds for his private hunt club membership, a wine cellar, and satellite phones for himself and his companions on an African safari.

Last week, I joined over 500 people in public protest of the re-vote of Breuder’s sweetheart deal. The Board scheduled this meeting because the original vote was handled incorrectly. In my address to the Board, I asked them to change their minds, turn this award down, and start this process over.

In the end, the meeting was all for show. The Board members went against the interests of the residents they are sworn to serve, with a 6 to 1 vote in favor of the deal. How can one vote this way, after hearing two hours of compelling public comments? It’s just baffling.

Lots of news outlets covered the Board meeting on TV and in print, including this great article in the Chicago Tribune.

What can we do?

1. Vote for community college trustees like Kathy Hamilton in the upcoming consolidated election on April 7. Trustee Hamilton has been the one bright spot on the COD board, demanding answers and revealing the extravagant waste of tax dollars by Breuder and the rest of that board. The other members of the COD Board were so angry with her watchdog work that they voted to “censure” her, but Kathy doesn’t deserve a “censure,” she deserves an award for uncovering the truth!

2. Tell your General Assembly members to pass laws to reform our community colleges. At a press conference yesterday, I presented the “Breuder Rule” to ban future excessive severance agreements, defined as more than one year’s salary and benefits. As for current severance agreements, which are protected by the U.S. Constitution’s Contracts Clause, we can’t ban them, but we can make sure that homeowners and students don’t have to pay for these abuses. So, the “Breuder Rule” would forbid a community college board from raising property taxes or tuition for the same number of years as the number of years of salary paid out under a severance agreement. The Chicago Tribune wrote about my plan in its editorial today condemning the COD Board.

To save Illinois, we’re going to need reform measures like these at every level, to try to restore the proper balance between the government and the people. This great effort is inspired by the core idea of our American experiment: that the people are in charge of their government, not the other way around.

Lombard, IL - "This is outrageous. There is no precedent for this in a community college setting in Illinois," Breen said. "I hate to say this, but this board has betrayed the trust of this community." Click here to watch. 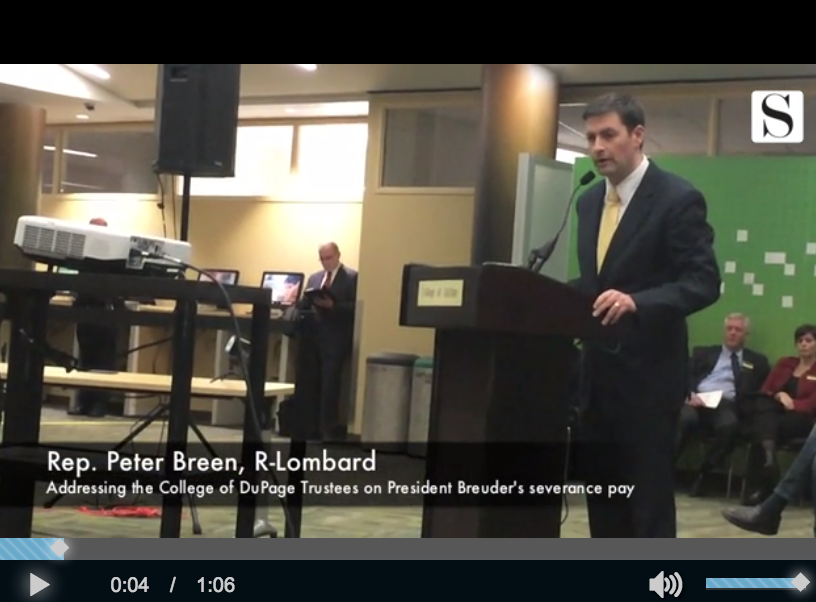 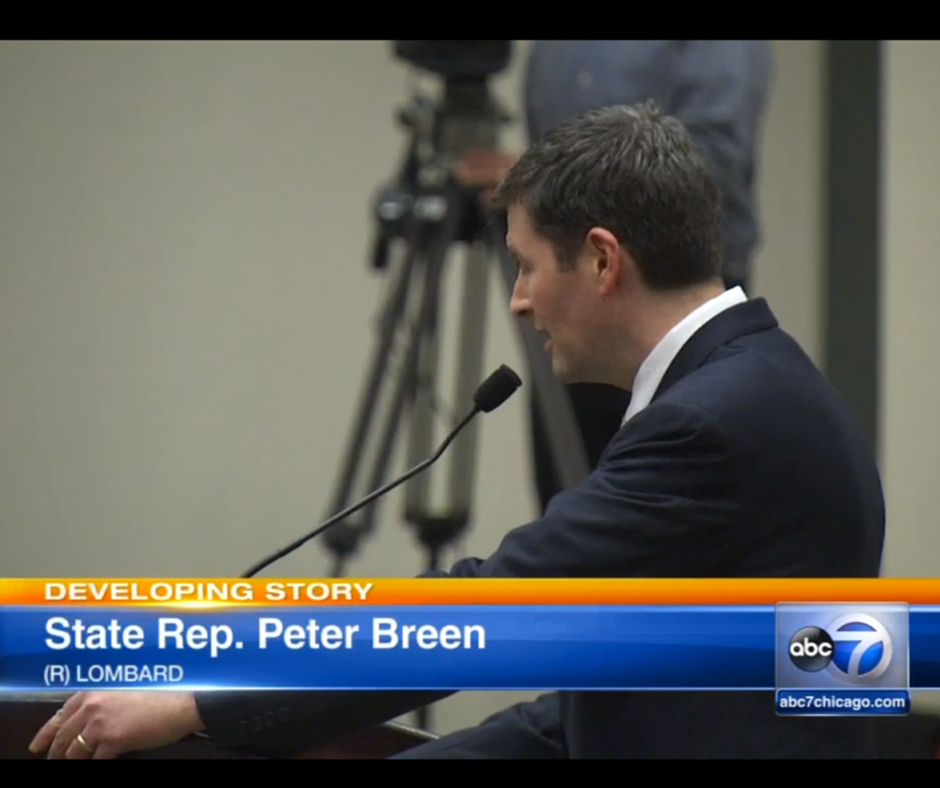 Lombard, IL - Click here to watch a clip of Rep. Peter Breen addressing the COD board just prior to their controversial golden parachute re-vote last night. Breen encouraged the board to do the right thing, stating that "this board has betrayed the public trust."

The Dream for Illinois 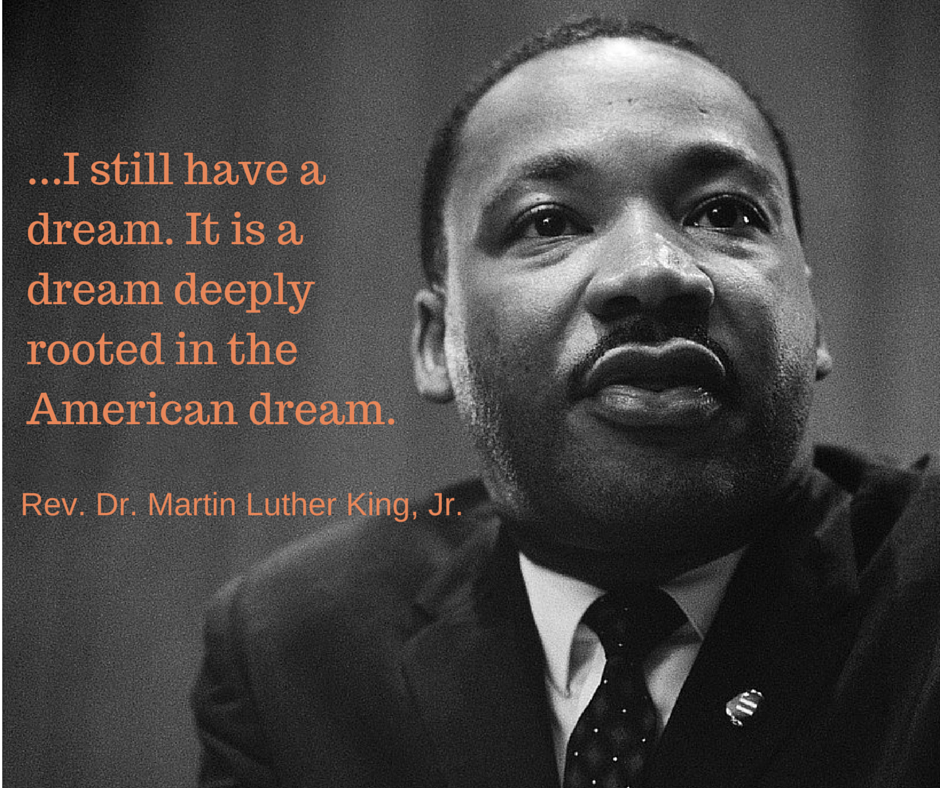 Today, we celebrate and remember the life and the achievements of the Rev. Dr. Martin Luther King, Jr.

Dr. King was one of the nation’s foremost advocates for racial equality, but even more, he was a champion of the American dream, in its fullest and richest sense.

The American dream is defined by one source as “the ideal that every US citizen should have an equal opportunity to achieve success and prosperity through hard work, determination, and initiative.” I wonder today whether Dr. King would recognize the American dream in Illinois.