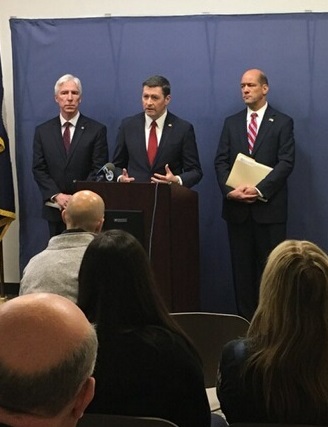 State Representative Peter Breen (R-Lombard) is partnering with DuPage County State’s Attorney Robert Berlin and State Senator Michael Connelly (R-Lisle) to address a dramatic increase in the number of people in DuPage County who have decided to “skip bail” and not appear in court.

“The Bail Reform Act that took effect in Illinois on January 1 this year was part of a national movement to improve the pre-trial justice system in this country,” said Breen. “While that Act includes some beneficial provisions, one specific change has unfortunately resulted in a significant spike in instances when defendants out on bail fail to appear in court.”

According to Breen, the new Bail Reform Act provides two classifications for criminal offences: Category A (more serious felonies, mostly Class X, 1, & 2) and Category B (mostly Class 3 & 4 felonies). When comparing instances of failure to appear in court offenses from January 1 through July 30 of 2017 and 2018, Category A offenses jumped by 83% and Category B offenses jumped by 71% during the similar seven-month timeframes. Breen believes the increase is a direct result of bond requirements and penalties that no longer provide adequate incentive for the accused person to appear in court. Felonies in DuPage County have spiked in 2018. Category A felonies, which include murder, home invasion, and aggravated violent felonies, have jumped 21% year over year. Category B felonies are up 8% over last year.

“This is a startling increase,” Breen said. “The law stipulates that failure to appear offenses are imposed at one Class lower than the original crime for which a defendant is charged, and often judges are not sentencing offenders to jail time for skipping bail. Hunting down and bringing bail jumpers to justice uses precious police and prosecutorial resources—and our communities are less safe with these individuals at large. At a time when serious felonies are increasing in DuPage County, most of which are committed by offenders from out of our county, we have to get serious about improving public safety.”

Proposed changes to the Bail Reform Act include:
Individuals who are out on bail and fail to appear in court would be charged with a “failure to appear” offense of the same Class (instead of the next lower Class) of the original crime with which he/she has been charged
“Failure to Appear” offenders would not be eligible for probation for bail jumping
When presenting the proposed legislation, Berlin said, “For our system of justice to function properly, those who commit crimes must be held responsible. The legislative changes proposed today will not only encourage defendants to appear in court when ordered, but will also help ensure that those individuals who do skip out on their bail will face significant additional penalties.”

Breen added, “Victims of crimes have a Constitutional right to timely disposition of a criminal case involving themselves or a loved one. When those charged with crimes fail to appear in court, victims are denied those rights.”